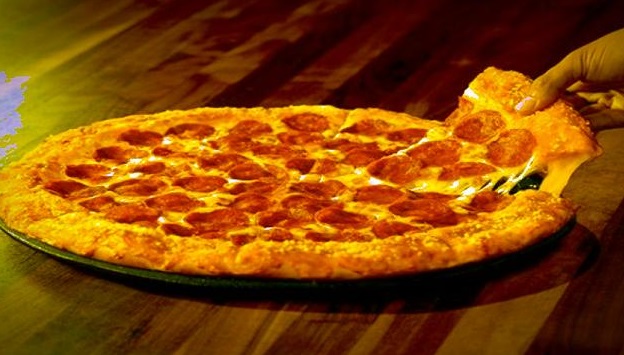 Fan of pizza and grilled cheese sandwiches? Then Pizza Hutâ€™s latest promotional pizza may be the thing for your â€“ the Grilled Cheese Stuffed Crust Pizza.

As you may have guessed from its name, the pizza has the hallmarks of a grilled cheese stuffed into its crusts, mashing together two distinctly different meals into one intriguing concept. A combination of mozzarella and cheddar cheese are rolled into the crust which is then toasted using breadcrumbs and butter to create a new and interesting, if somewhat polarising pizza.

Of course, this wild concept is nothing new to Pizza Hut. The company caused a similar stir with the release of their Hotdog Bites Pizza last year, which involved small hotdog bites being stuffed into the crust of the pizza to create another wholly unique pizza recipe.

Now it looks like Pizza Hut wants to carry on its newfound tradition of creating wild pizza ideas in the hopes of luring in new customers, and perhaps more importantly, to get their name back in the headlines from the viral reactions these new foods tend to cause.

Much like the Hotdog Bites Pizza, the reaction to the Grilled Cheese Stuffed Crust Pizza has divided opinions. People took to social media to share their thoughts, and it currently seems split down the middle â€“ the idea is either loved or hated at the moment!

Many people are perhaps confused about how the Grilled Cheese Stuffed Crust differs from the traditional stuffed crust, which Pizza Hut helped to popularise when first released in the 1995, and there are a few differences worth noting.

The aforementioned bread crumbs and butter addition to the crust really does give it a different consistency to a stuffed crust, offering a much crunchier topping. These cheese combination is also different from the traditional stuffed crust found at Pizza Hut.

“The Grilled Cheese Stuffed Crust Pizza is an imagination of a classic grilled cheese and a traditional pizza,â€ said David Timm, Pizza Hut’s chief marketing officer, in a statement. “The result is a delicious, flavorful pizza that packs the punch of a gooey, crunchy grilled cheese.”

The Grilled Cheese Stuffed Crust Pizza is available from Monday, 19 September. A large pizza with a single topping costs $12.99, and you can select from all of your favourite Pizza Hut topping, so be sure to try out this cheesy behemoth whilst it is still available!